The Farmer of Marshfield
1782—1852, This era begins in 1832 when Captain John Thomas, son of Nathanial Ray Thomas, sold the estate to Daniel Webster, lawyer, orator and the Honorable Senator from Massachusetts. Webster farmed this property for twenty years. He built a small structure a short distance from the house and used it as a law office and horticultural library. There he met with dignitaries who came to visit him. Webster’s home was renowned and was described on the floor of the Senate and became part of the Congressional Record. One of his visitors was John James Audubon who painted many of his wildlife pictures in Marshfield. Ironically, part of the Webster Estate is now the property of the Massachusetts Audubon Society.

In 1840, Webster was named Secretary of State by President William Henry Harrison and it was in that capacity that he entertained Lord Alexander Ashburton at Marshfield and here they laid the groundwork for the Webster-Ashburton Treaty, which in 1842 set the boundary between Maine and Canada. As Secretary of State in 1852 Webster met with the British Minister Lord Compton, in Marshfield, to settle the dispute between the New England Fisheries and England; an action he spoke of at Cherry Hill when he delivered his last public speech.

Daniel Webster was the “Farmer of Marshfield” and here he bred cattle, improved the soil and planted many species of trees from all over the world. Many of his trees still stand. The Great Linden Tree under which he was laid in state at the time of his death has been entered into the Book of Champion Trees as the Nation’s largest English Linden. It was Webster who introduced to the local farmers the use of fish and kelp as fertilizer and it was his agricultural causes that inspired the townspeople to organize what would become the Marshfield Fair.

When Webster died in 1852 he was Secretary of State, the only man to serve in that office under three presidents: William Henry Harrison, John Tyler and Millard Fillmore. He was known as the “Defender of the Constitution”, having tried successfully before the Supreme Court over 150 cases. Many of those cases set precedents that affect our lives to this very day, for example:

1818: The Dartmouth College Case insured forever the independence of allprivate and charitable institutions.

1819: McCullough vs. Maryland defined the limits of State and National power.

“It is wise for us to recur to the history of our ancestors. Those who do not look upon themselves as a link connecting the Past with the Future, do not perform their duty to the world.”

1824: Gibbon vs. Ogden set the precedents for the establishment of interstate and intrastate commerce which would effect not only the waterways of that era, but later the highways, railroads and airways in our lifetime.

The latter two cases firmly established the Supreme Court as the final interpreter of the Constitution. Webster’s stirring speeches in the Senate in 1830 and 1850 without a doubt postponed the Civil War each time, thus giving the North thirty years to build its industrial strength while the South remained agrarian. This devotion of Webster’s to the concept of “Liberty AND Union, now and forever, one and inseparable!” clearly changed the course of American History and the lives of everyone of us, even to this day.

Closer to Marshfield and its fishing industry, and all the New England Fisheries, Webster obtained, as Secretary of State, perpetual fishing rights off the Canada shores by fighting in 1852 for the continuance of an 1818 treaty which the British were threatening to dissolve. The rights of fishing the Grand Banks were secured for American fishermen by Daniel Webster. Remember that the next time you eat fish.

The original house burned in 1878 and was rebuilt by Webster’s daughter-in-law. On the front facade is the Webster coat of arms. It was to this house that President Chester A. Arthur came to honor Webster in 1882, the centennial of his birth. Many dignitaries have visited this place including Calvin Coolidge, governors, senators, and just plain folks who know Webster for the great patriot that he was.

The fact that the original house is gone makes no difference to the fact that this place, this land has played a significant role in the history of Marshfield and the Nation. Webster chose the Winslow Cemetery for his last resting place.

The Town of Marshfield considered this Thomas-Webster Place important enough to be the focal point of the Town Seal.

1637 —— Pilgrim Trail a native trail dating to prehistoric times, and runs through this property, is incorporated into Plymouth Colony as the first court ordered road.

1640 ——William Thomas an original settler of Marshfield is granted by King Charles I of England 1,000acres, which includes this property.

1774 ——Nathaniel Ray Thomas a Tory (great, great, great, great grandson of William ) built a two story house. By the time of the Revolution, the estate included stables, a carriage house, a blacksmith shop, a bake house, a smoke house and barns.

1775 ——Nathaniel Ray Thomas is protected from local rebels by a troop of British regulars encamped on his property.s

1791——The 160 acre estate is returned to John Thomas, a son of Nathaniel Ray Thomas, and a Patriot..

1825-1830—Daniel Webster, his wife Grace and their family visit here after spending time in Sandwich, MA. They then vacationed here as guests of Capt. Thomas. Webster and his family enjoyed fishing and hunting on this property.

1832——-Webster purchases the 160 acre farm and buildings for $3650 from Captain John Thomas, who at Webster’s insistence retains life tenancy. Thomas’ sons Charles Henry and Ray are hired to supervise the farm operations.

1837——-Captain Thomas dies and Webster moves into the house, then known as “Green Harbor”. The estate was named for a Captain Green who took refuge in a storm in the outlet of Green River where Webster also had a boathouse and gunning shop. A 3rd story monitor, a one-story surrounding veranda and a rear kitchen ell with attached outbuilding (probably a wood shed and chaise house) had been added to the house by this time.

1838——-The larger yellow bog pond is excavated and enlarged as a trout pond.

1839——-A law office is constructed beside the Avenue (the road into the estate) near the main house.

1843——-Webster’s additional purchases of land extend the property to 1800 acres. His daughter Julia designs and has built a Gothic style library addition to the west end of the house with latticed veranda surrounding it.

1852——-Webster dies on October 24, and is buried in the Winslow Burying Ground.

1855——-Subdivision of the Webster Estate by his heirs reduces the size of the estate.

1880——-The new house built on the original foundation is finished. The library wing and kitchen ell were not rebuilt.

1900s——The garage is built and the surviving laundry outbuilding is rebuilt.

1950——-The Hall heirs sell the property to Vincent Cohee who establishes Camp Daniel Webster, a children’s day camp with recreation areas: a target range, an archery shed, a miniature golf course, a baseball diamond, and a paved basketball court. A roller-skating rink is built at the front of the property. A swimming pool and shed were built in 1964 on the former library wing site.

1969——-Webster’s law office is moved to the grounds of the Winslow House for preservation.

1979——-The second Webster barn is demolished due to deterioration.

1985——-The Webster Estate and Camp, which remains open is sold to William Last. Additional land is rezoned for private homes.

1990——The Daniel Webster Preservation Trust is formed for preservation of the property.

1996——The Town of Marshfield purchases the remaining 14 acres of the Thomas-Webster Estate.

The Daniel Webster Preservation Trust is given a three year lease on the house and property.

2013——The Hood Museum at Dartmouth College donates a carriage that belonged to Daniel Webster, and also a large portrait of Daniel painted by Thomas Bailey Lawson (1807-1888).

2015——The Webster Law Office is returned to the property. 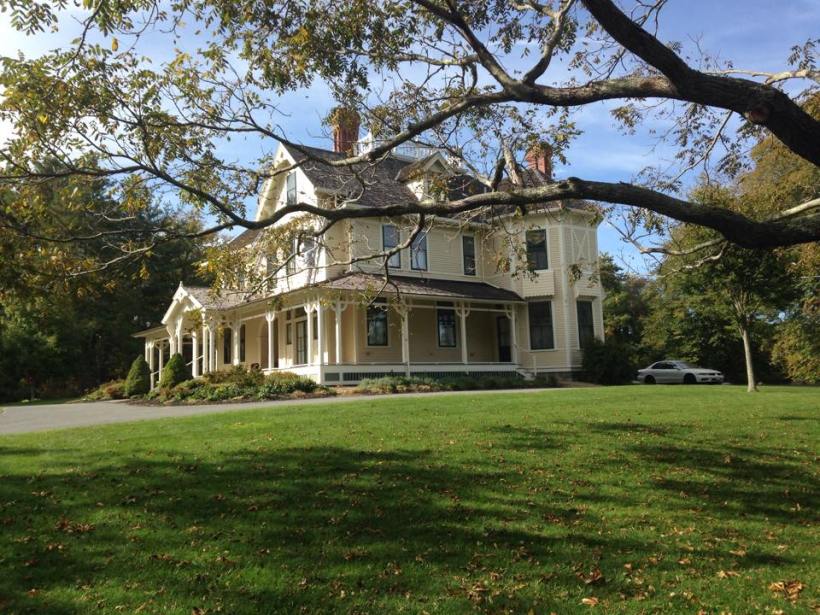 Annual Donation  Become part of the DWPT membership by choosing the highest donation category you can afford: